On February 19th, at the normal monthly meeting of the Selkirk Fire District Board Of Fire Commissioners, William Asprion was appointed to the Board to fill the vacant seat vacated by Commissioner Barak Strock in January.   Commissioner Asprion’s appointment is until the end of this year.  At the end of the year there will be a special Commissioner’s Election for the remaining one year on Commissioner Strock’s original five-year term, which is set to expire on 12/31/19.

Commissioner Asprion brings over 40 years of Fire Department/District knowledge to the Board, serving the last 7 years as Chief of the Selkirk Fire District.  As Chief of the District he worked diligently, with the Board Of Fire Commissioners, to ensure the District was fiscally responsible in its decision making.  He reached out to various local businesses to obtain grants, and other forms of funding, for various projects the District was working on.  At the same time establishing great relationships with these businesses.  He also used his skills as a salesperson to help get top dollar for used apparatus the District was selling.  Bringing back good returns that were then used in purchasing new equipment. 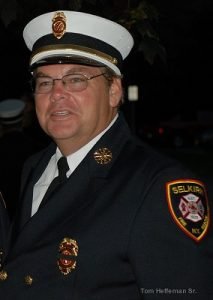