On March 5th, 2018, at the annual ceremony held at the Nathaniel Adams Blanchard 1040 Post, in Delmar, Past Chief & Current Commissioner William Asprion was presented with the 2017 Selkirk Fire Department Firefighter Of The Year Award.  Chief Asprion was presented with the award for his over 40 years of service to the department and the community.  Especially for the last seven years serving as Chief of the Department.

Below the pictures is the speech given at the ceremony by Commissioner Doug VanApeldoorn, who presented the award along with Chief Joe Michaniw. 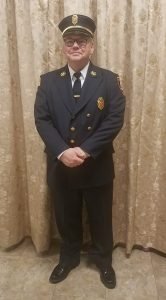 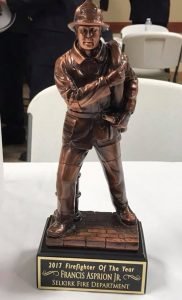 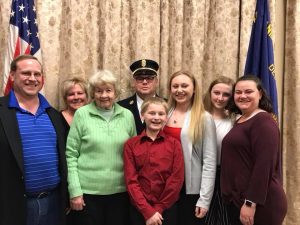 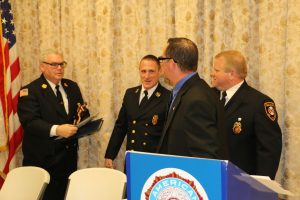 PRESENTATION SPEECH GIVEN AT THE FIREFIGHTER OF THE YEAR AWARDS CEREMONY:

Commander Maddock. Distinguished Guests, and Fellow Emergency Services Brothers and Sisters that Are With Us Tonight.

On behalf of the Selkirk Fire Department Board Of Directors, Chief Michaniw and  I have been asked to recognize tonight our Department’s selection for our Firefighter/Person Of The Year.

We thank you Commander Maddock, and the members of the 1040 Post, for giving us this stage, and opportunity to recognize one of our own for their contributions to not only our fire department, but also to our community.

This year’s recipient, of the Selkirk Fire Department Firefighter Of The Year Award, is Past Chief William Asprion.

Sometime after this he moved into his family home in Glenmont, and at the same time moved back to Selkirk Fire Co. 2

In 1999 I joined the department, and did not really know Bill too well.  I saw him at an occasional fire call or drill.

Within a couple years after I joined the department he hurt his back at his job.  This put him on the sidelines, on the active-disabled list.  During his time on the active-disabled sidelines I was working my way up the ranks and had become 1st Asst Chief and  training officer at Selkirk Fire Co. 2 and was responsible for maintaining the firefighter training records for our fire company.  I remember reviewing our members training records and Bill’s folder stuck right out.  Not because his name begins with the letter “A”, and it was in the front of the filing cabinet.  What made it stand out was the overall size of the folder.  If you think to our school systems the kid with the thickest folder was the one kid that got in trouble the most.  But in all seriousness the main reason his folder was so overflowing was because of everything he had accomplished up to that point.  All of his OFPC course certificates, Extrication Training and Competition correspondence, Past Officer oath forms, etc. etc..  I then realized something I hadn’t up until that very moment, which was just how much he had contributed to our department prior to my arrival.  He had a lifetime’s worth of experience and commitment already, up to that point.  I really gained a new perspective on Bill that day.  Kind of an important lesson all new members need to think about.  You just don’t know, when you join, and look around the room at your other brother and sister firefighters, just want they have already accomplished before you joined.

Thankfully around 2005-2006, after a few years out of service, his back healed up enough to back active.  Which says a lot about Chief Asprion because a lot of guys never came back active after going active-disabled.  But here he was coming back.  And as the training officer he immediately seeked me out and wanted to get re-qualified on the trucks, and be brought up to speed on what he has missed over the last few years.  New Procedures, Guidelines, etc..  The “old” guy letting the “new” guy train and teach him.  That happens so much in the fire service right?  Another reason why he gained my respect.   Because of his re-dedication, within a couple of years of returning to active duty he was elected as Co. Chief of Selkirk Fire Co. 2.  A position he absolutely excelled at for three years.  He was the District Training Officer.  He pushed our three fire companies to train more together, because working together, we would be a stronger unit, and serve our community better.  And he always reinforced into us that training was the key component to being good firefighters.

In 2011 all of his contributions were recognized when he was elected to the position of District Chief.  A position he held through 2017.  Seven years as Chief is one hell of an accomplishment and deserves to recognized rightfully so.  And to quote the Chief himself, here are a “few quick things”  that he accomplished during his time as our Chief.

These are just a few of Chief Asprion’s many accomplishments he achieved during his seven years as Chief.